Charles' story is long, but inspiring!

Today marks one year since Charles had the emergency surgery to save his life by removing his right front leg. This is a HUGE milestone. Since Charles is in liver failure, the surgery itself was risky. But also, the duration in which Charles would continue to be with me post-surgery was largely unknown. I had no idea if the surgery would prolong Charles’s life by 6 months or even one year, but I knew it was his best chance at life so we did it. And here we are… one year later. Wow. I cannot begin to tell you how amazing this past year has been with my little dude. 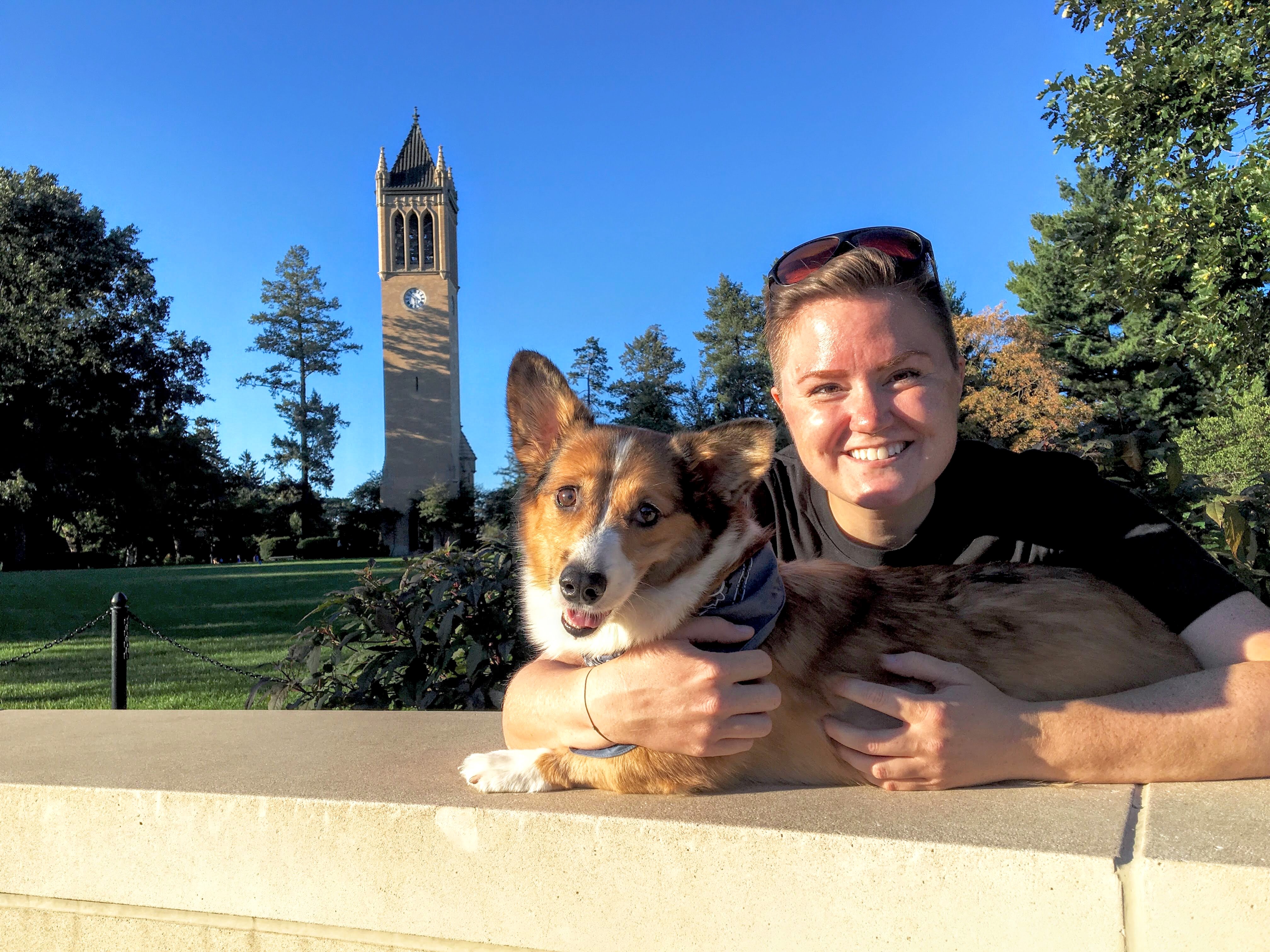 Charles and I on Central Campus at Iowa State University in Ames, Iowa just two weeks after his surgery!

Of course there was all of the hullabaloo over the Barkchshler (an online competition hosted by Keith Habersberger of the Try Guys) which gained Charles a worldwide fan base and at one point close to 75,000 Instagram followers (currently at 73,600 followers). With this newfound platform to share Charles’s inspirational story, we continue to spread a message of love and acceptance through many facets of life. The fact that one of Charles’s posts can make even one person smile besides myself is awesome and I really see the potential to continue sharing the notions centered around positivity and inclusivity.

The past six months have been really trying for Charles and I though, mostly for reasons that affect me, a human, most personally. In May, I lost my paternal grandfather. This was the first loss of a grandparent that I have experienced, and I had grown very close to Grandpa in the last few years. Grandpa loved Charles, too. I was happy to share the joy and love of Charles with Grandpa whenever I went home to visit. I think their favorite thing to do was to play soccer together (Charles’s favorite form of fetch). Then in July, I defended my dissertation, which caused heaps and heaps of stress and anxiety in the months prior to the date. Then there was the stress of job hunting and moving. Charles was a champion through it all. I would truly be lost without this little pumpkin fluffer booty boy. 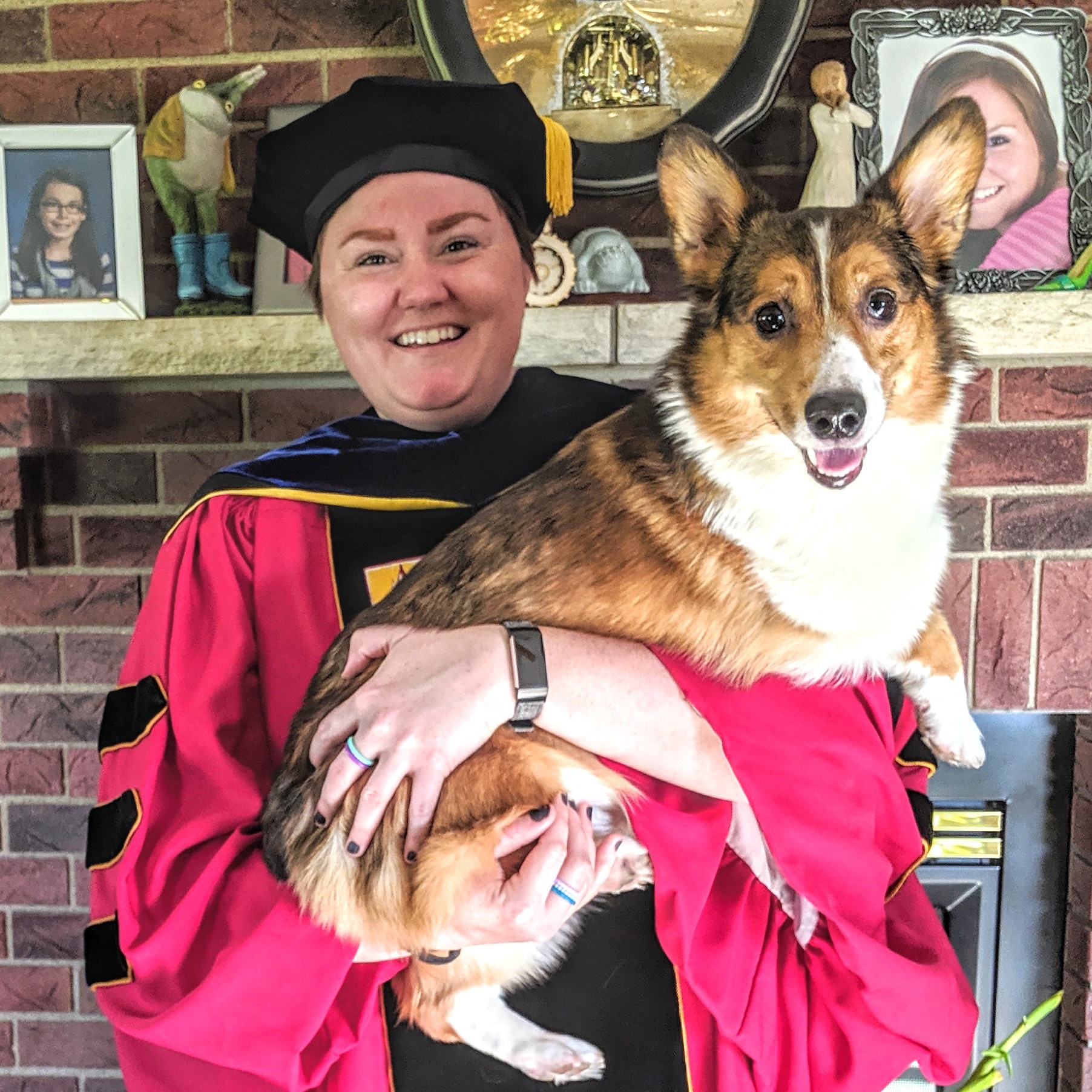 Charles and I in my convocation regalia

Some other things that we did in the past few include going to Northern Wisconsin for a couple of days with my family. This was awesome because Charles got to try his hand at riding in a UTV. We did NOT do any trail riding with him though. I feared that would be too stressful and possibly cause too much strain on his three little legs. But I think he enjoyed the little tiny bit of road riding that he did. 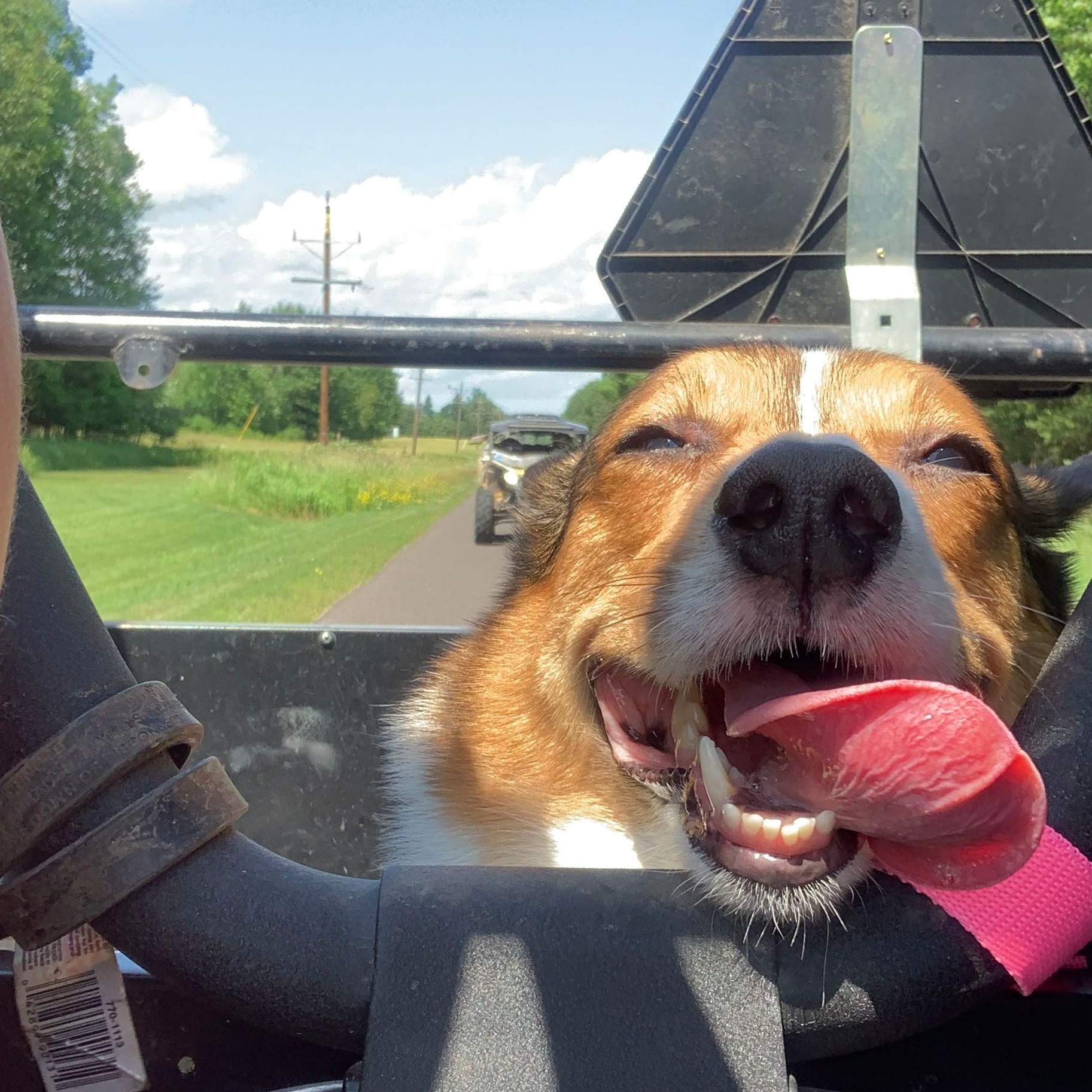 Charles riding in the UTV in Wisconsin

One of the most exciting additions to Charles’s life in the past six months was the arrival of his K9 Sport Sack! I really wanted to get one of these so I could start brining Charles along on hikes. This was something I wanted to do for a long time but hadn’t been able to while he was having the chronic issues with his right front paw. And I knew on three legs that he wouldn’t be able to do entire hikes. So my thinking was that we could get a K9 Sport Sack and use it as a way to give him a break from hiking when he needs it! It has been AWESOME! Here are some photos from our adventures this summer: 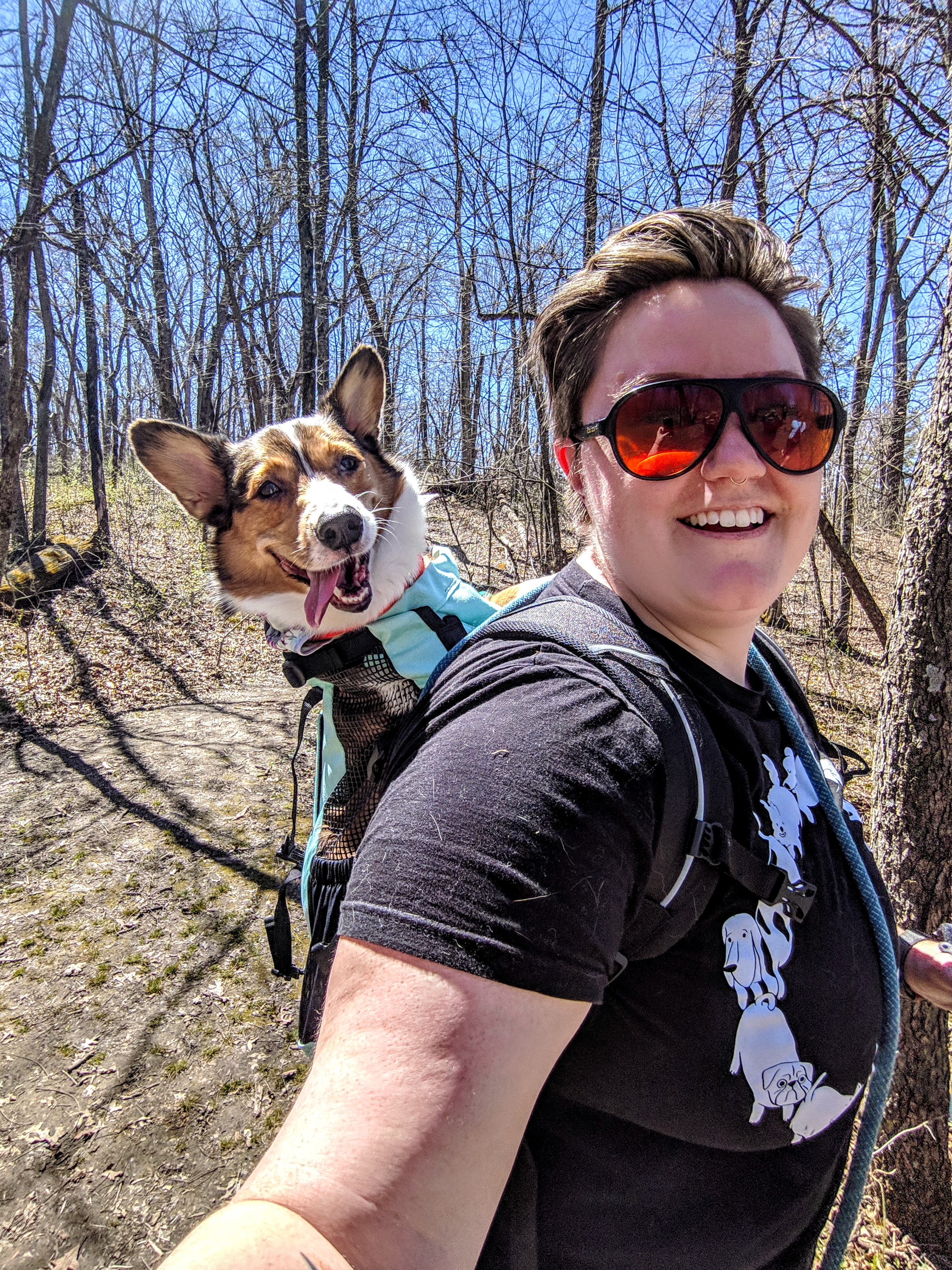 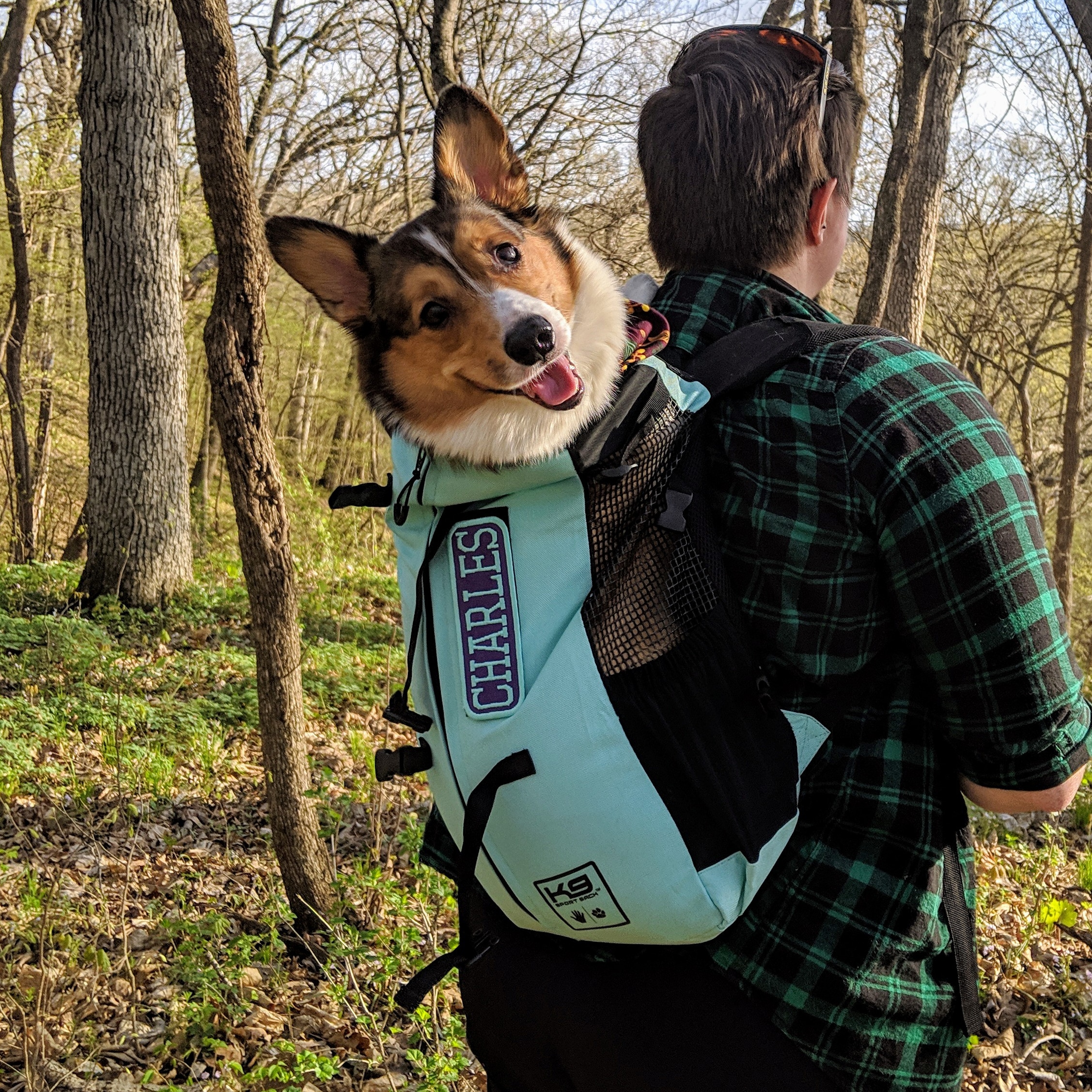 Just a couple of best friends on a hike at Ledges State Park in Iowa.

I also saw an opportunity to let Charles try swimming again. Swimming was something that he really enjoyed but then was unable to swim for over two years due to various health issues including the chronic issue with his right front leg. So, I got the dude a life jacket and we went for a swim. Charles had SO MUCH FUN. Like, imagine the most amount of fun you could have and TRIPLE IT. 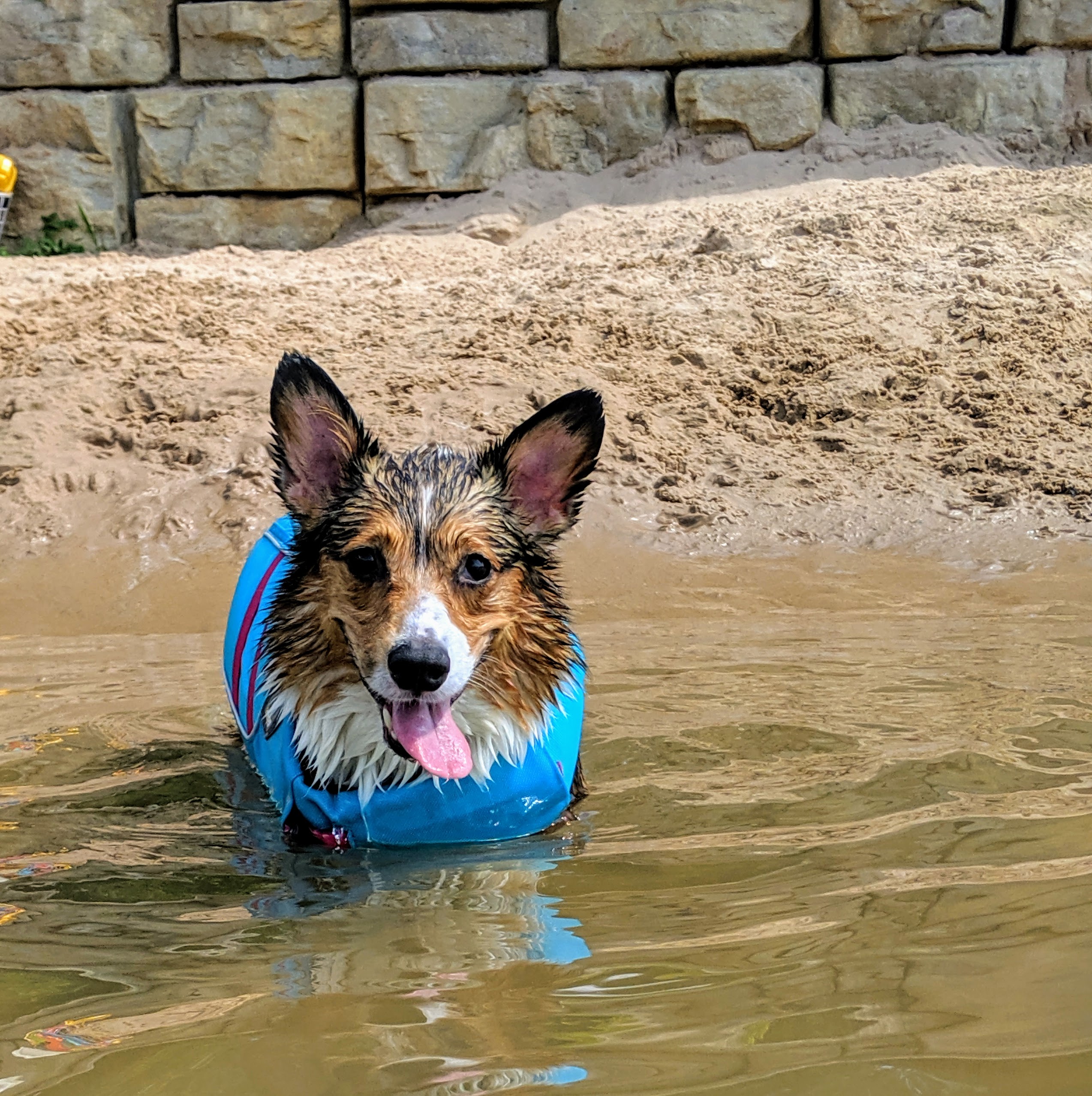 Look at that smile!

Charles was also in the running to become the next Pibboraffi plushie! This got him some local news attention, which was a fun adventure. However, he did not win the competition. 🙁 But we still had a lot of fun and I am still contemplating commissioning a set of Charles plushies anyways! 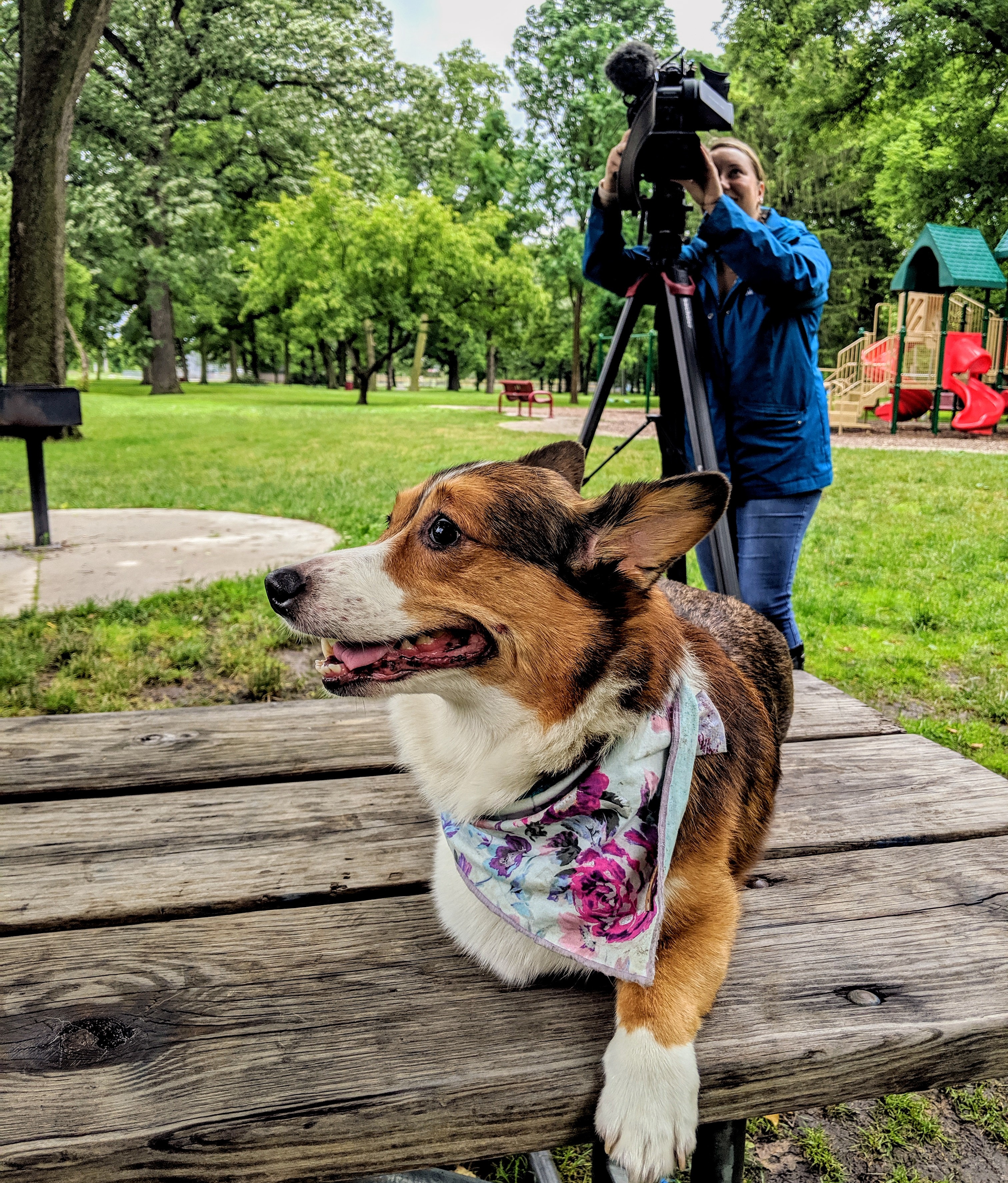 Filming for one of Charles’s local news stories!

And here are a few other random things that happened in the past six months or so: 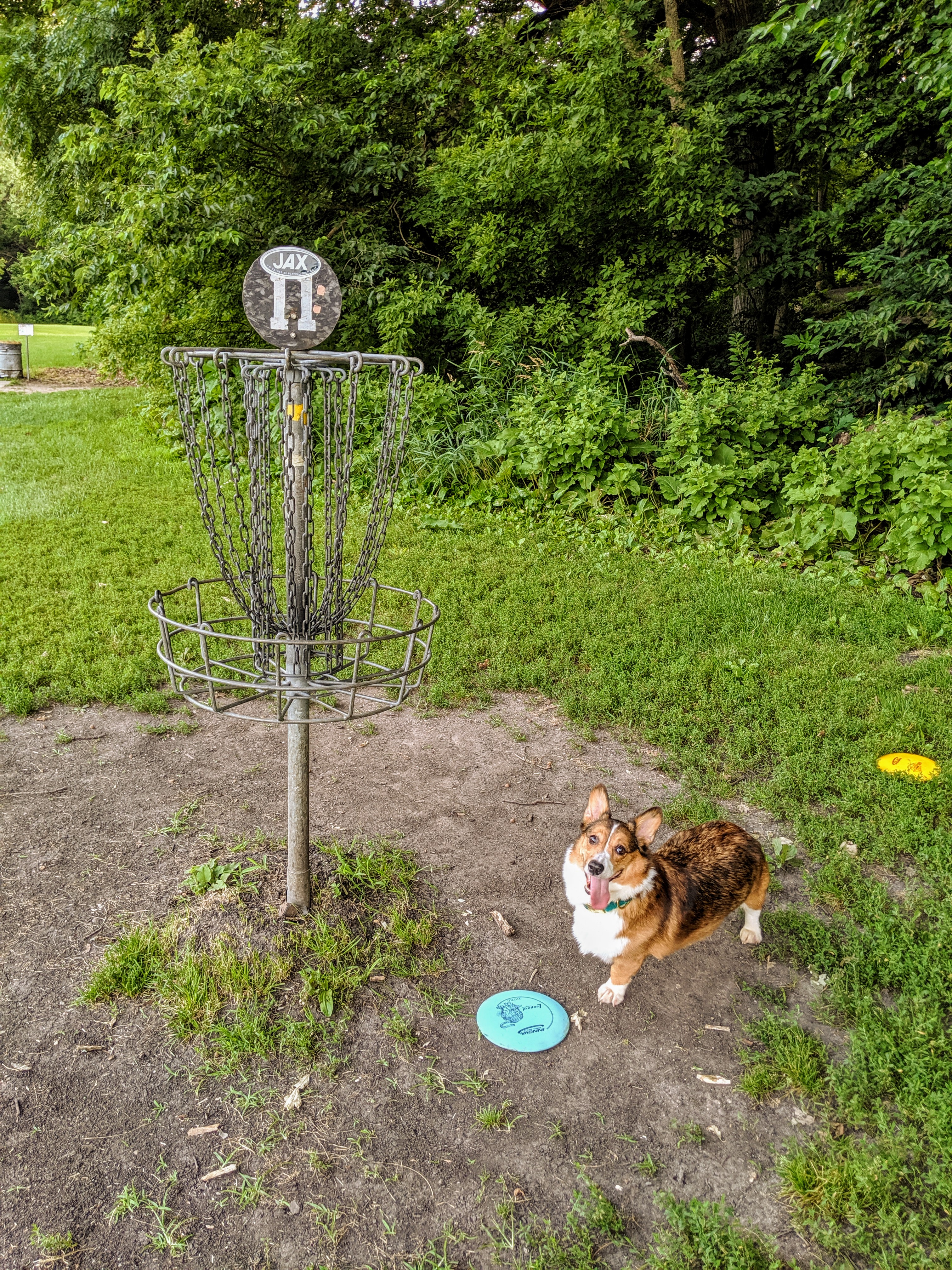 Charles found a new love for frisbees and chasing discs when I take him disc golfing! 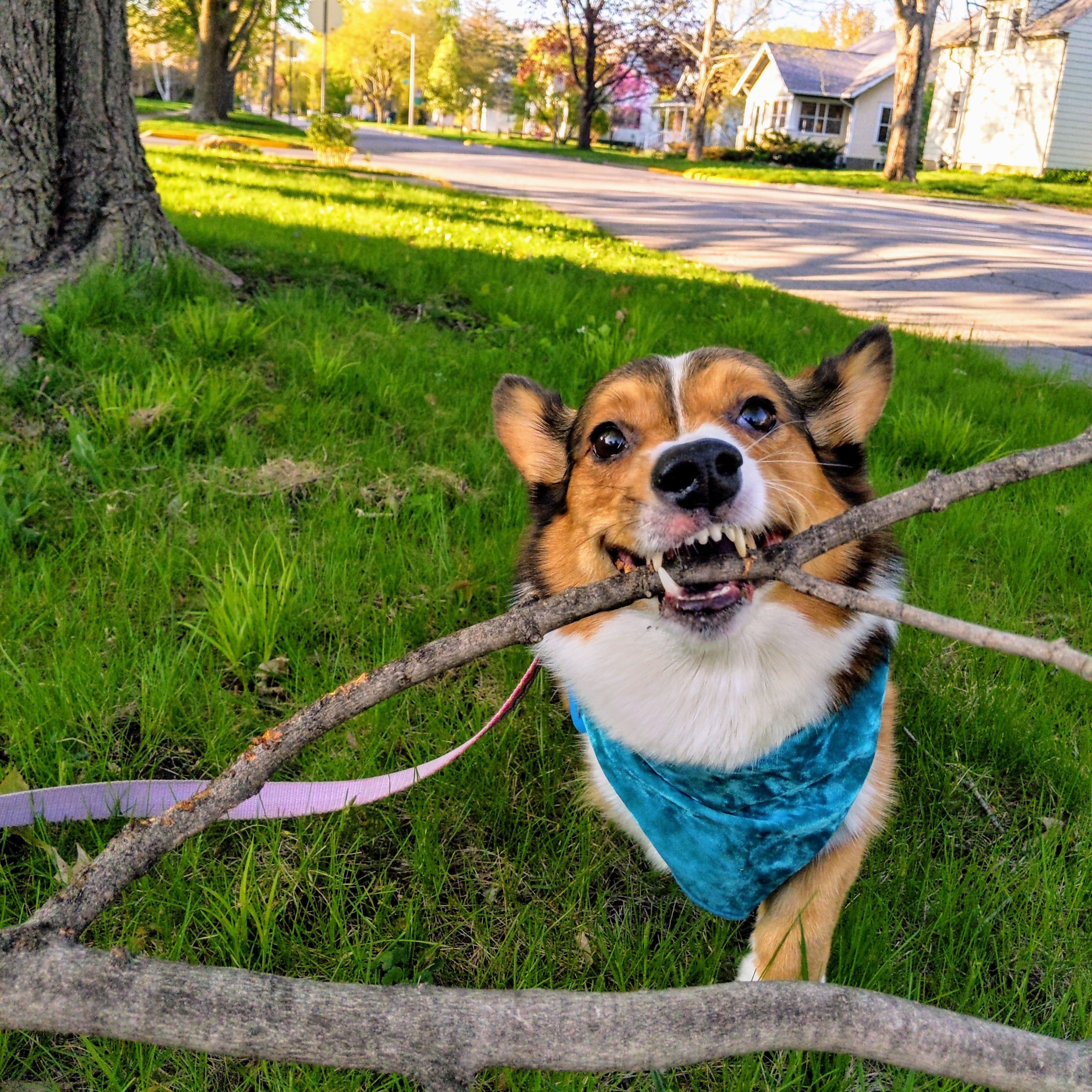 Charles likes to find sticks to chew on while we are on walks and I got this really cute photo of him doing so. 🙂 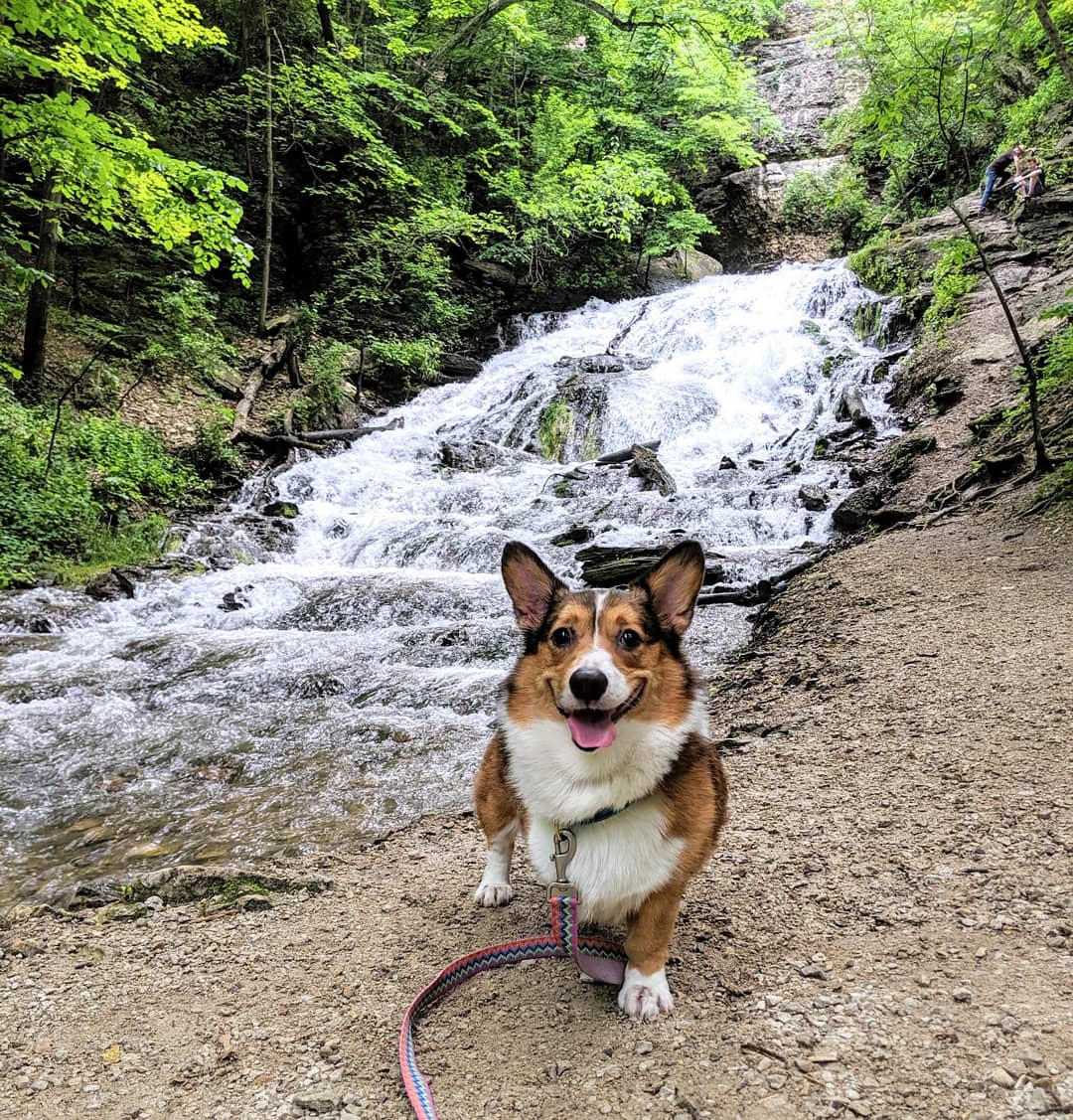 Charles made it to Dunnings Springs in Decorah, Iowa for the great photo op!

Charles went for a bike ride with me!

I got Charles a new bed that he ABSOLUTELY loves.

Charles is loving that he has a big window with a couch from which to protect the house. Our first time living in a house on our own, he definitely enjoys having the run of the house all day while I am gone at work. 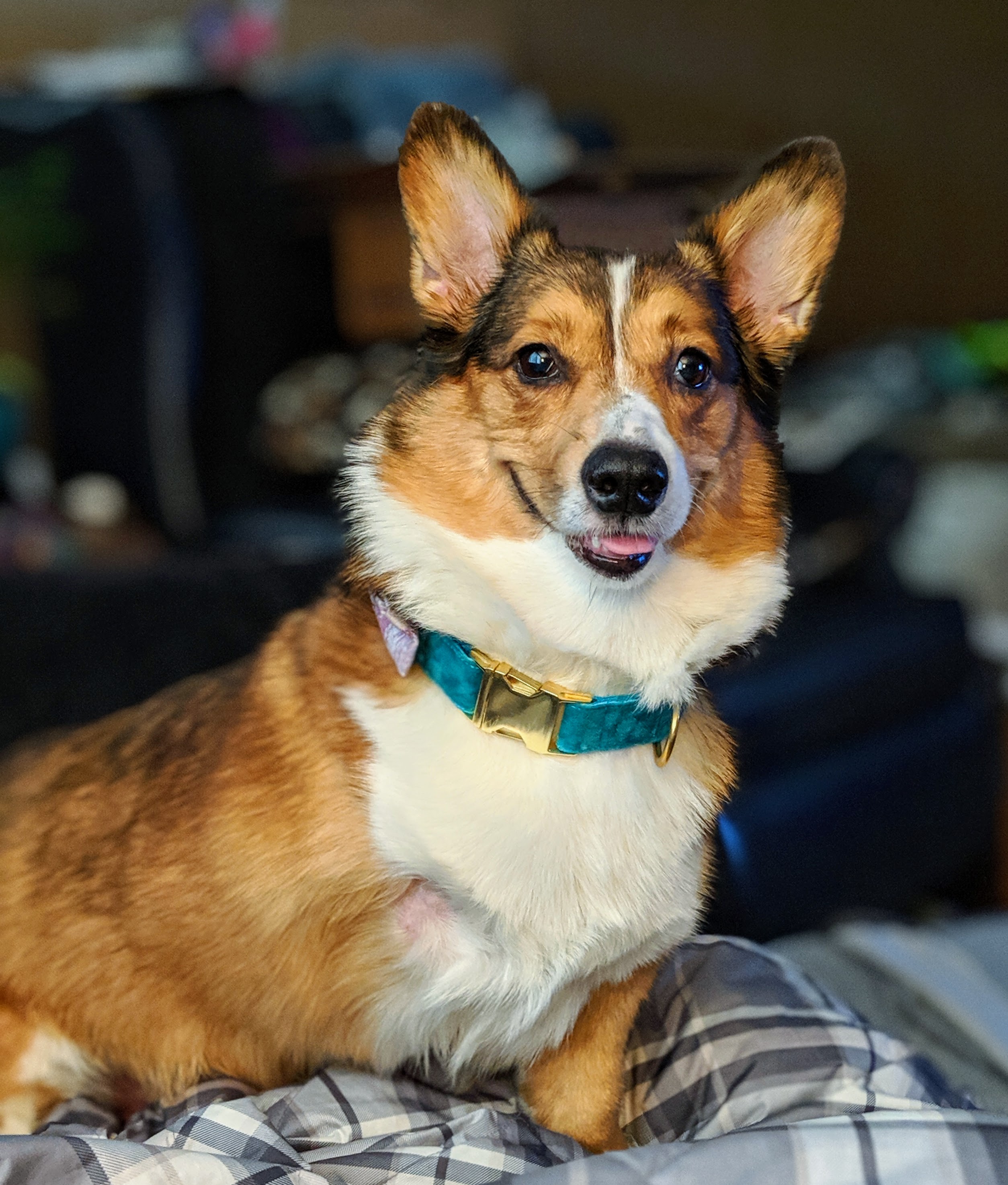 And now we celebrate one year post-amputation! This boy is doing so well!

This site uses Akismet to reduce spam. Learn how your comment data is processed.

Theme by Anders Noren — Up ↑